New Turkmen Leader Appears to be More of the Same

The votes have been cast for the next leader of Turkmenistan and with an absurdly large voter turnout reported by government officials it appears that the future may hold more of the same for the people of Turkmenistan.
Below is a summary of the article Turkmenistan: Special Presidential Election "Stage-Managed" of Eurasianet.org. 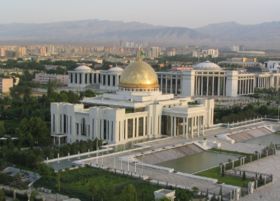 spoke [before the election] repeatedly about the need to implement changes ... The vote, however, was conducted in the best Soviet tradition..."
"Given the government’s performance in the vote, there are growing doubts that Berdymukhammedov’s reform effort will meet even the minimal expectations of Western observers."
"The implausible reported turn-out [along with] the absence of free media or alternative candidates signal that the election itself is not a fresh start. It is history repeating itself."
Posted by Tom at 7:29 PM

Most Read Posts on This Blog

A major source of the American debt problem

In 2006 Christopher Buckley, son of Wm F. Buckley said, "President [George W] Bush has now borrowed more money than all other Presidents combined. The spending that he has enacted is amazing. It amazes me that he calls himself "conservative."” [On PBS NOW 3/3/06].
This borrowing was done with the consent and support of the Republican Party. This is why the United States has a major debt problem. [Do you remember that President Bush came into office with a budget surplus?]

Notable Entries on this Blog